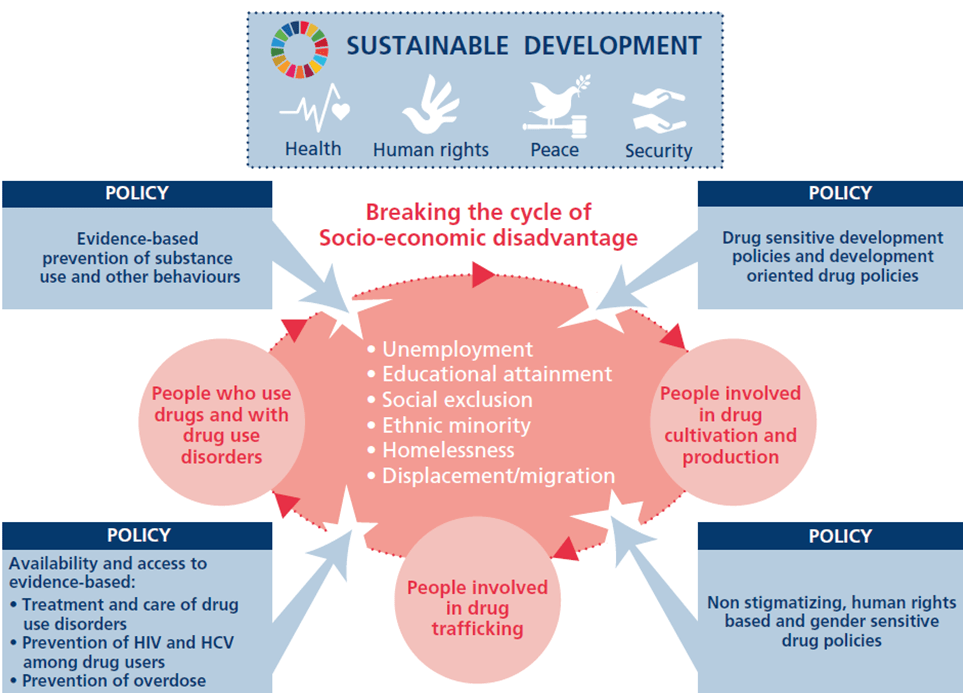 According to WDR 2020, drug use increased 30 per cent since 2009, an estimated of 269 million people who use drugs in 2018. The report estimated in 192m people who use cannabis, 58m opioids, 27m amphetamines, 21m ecstasy and 19m cocaine. Cannabis is the most used illicit substance. However, opioids are the most harmful, accounting for 66 per cent of the 167,000 deaths related to drug abuse.

The World Drug Report 2020 provides a wealth of information and analysis. These data are particularly import to support the international community in implementing operational recommendations on a number of commitments made by Member States.

> 1 out of 8 people who need drug-related treatment receive it.

> Seizures of amphetamines quadrupled between 2009 and 2018.

> More than 80% of the world’s population are deprived of access to controlled drugs for pain relief and other essential medical uses.

Impact of COVID-19 on drug use and trafficking

The measures implemented to prevent the spread of COVID-19 have affected all aspects of the illegal drug markets, from production to trafficking to use. For example, drug shortages have been reported and could have negative health consequences for people with drug use disorders.

Drug supply shortages can go together with an overall decrease in consumption, like drugs that are mostly consumed in recreational settings such as bars and clubs. But may also, especially in the case of heroin, lead to the consumption of harmful domestically produced substances or to more harmful patterns of drug use by people with drug use disorders.

The impact of the pandemic on drug markets is unknown and hard to predict in the long run, but it could be far-reaching. Drug markets could be disrupted by the economic downturn and associated lockdowns. Rising unemployment and lack of opportunities will make it more likely that poor and disadvantaged people engage in harmful patterns of drug use. For instance, suffer drug use disorders and turn to illicit activities linked to drugs, like production or transport. Drug trafficking organizations are likely to exploit the situation, boosting their ranks with new recruits. With Governments less able to respond, these shifts could quickly take root and become the new reality for many communities.

> Position Statement of the CSFD on Covid-19

> Statement by the UN expert on the right to health 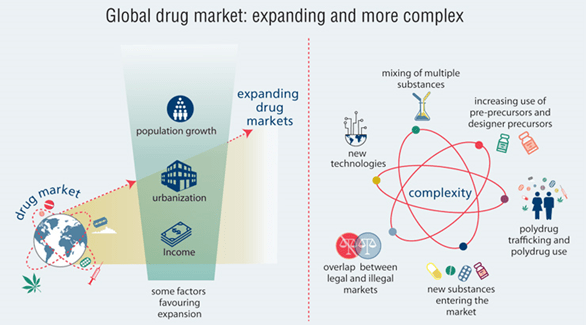 Over the past two decades, drug use increased far more rapidly in developing countries than in developed countries. This partly reflects differences:

Drug markets are becoming increasingly complex. Plant-based substances such as cannabis, cocaine and heroin have been joined by hundreds of synthetic drugs. And many not under international control. There has also been a rapid rise in the non-medical use of pharmaceutical drugs.

Roughly 500 new psychoactive substances are found on the national markets of Member States each year. Currently, most of those are stimulants, followed by synthetic cannabinoid receptor agonists and a smaller number of opioids. However, while the overall number of NPS has stabilized, the proportions have changed. Opioid NPS accounted for just 2 per cent of the number of NPS identified in 2014 but by 2018 that figure had risen to 9 per cent.

Opioid NPS, many of them fentanyl analogues, have proved both potent and harmful. In particular, fueling overdose deaths in North America and to a lesser extent in other regions. Individual NPS hardly ever establish their own significant market. However, evidence from Europe suggests synthetic cannabinoids are a significant problem among marginalized sections of society. Such as the homeless and prison inmates.

Is legalization behind the global slump in cannabis herb seizures? Global seizures of cannabis herb fell to their lowest level in two decades in 2018. A slump driven by declines in North America, where seizures have fallen by 84 per cent in the last 10 years. By contrast, seizures almost doubled in the rest of the world over the same period. The pattern of seizures suggests policies aimed at liberalizing cannabis markets have played a key role in the decline.

Medicines for pain relief and palliative care are unequally distributed across regions. More than 90 per cent of all pharmaceutical opioids available for medical consumption were in high-income countries in 2018.

Only 1 in 8 people with drug use disorders receives drug treatment each year.

And only 1 in 5 people in treatment is a woman!

Harmful consequences of opioid use 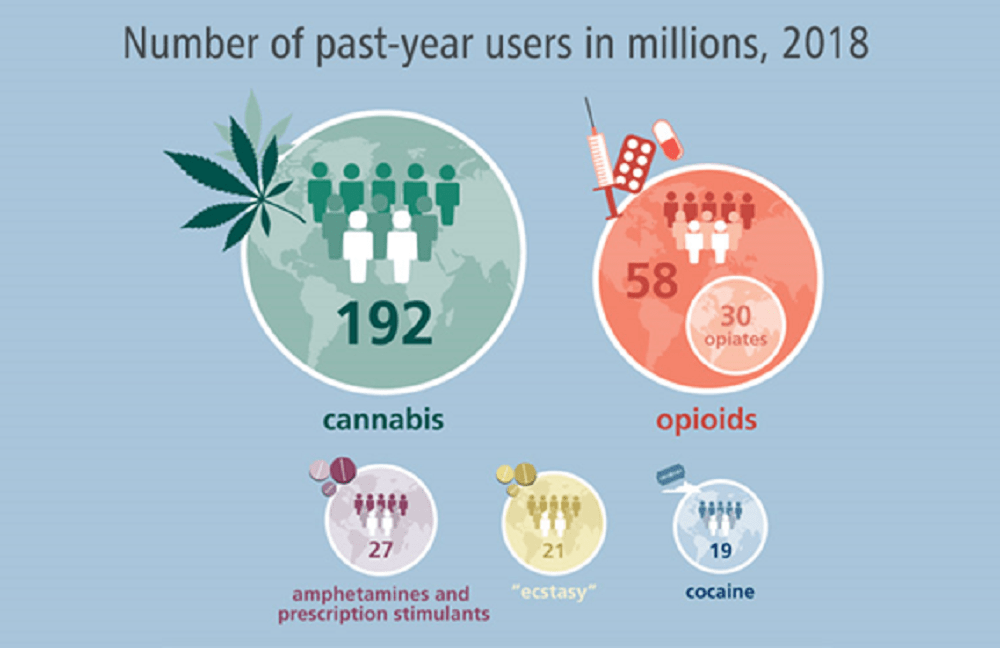 In West, Central and North Africa, tramadol fuels the opioid crisis, while in North America, by fentanyls. Those sub-regions have little in common in terms of economics, demographics or general patterns of drug use. Nonetheless, substances that are easy to access and cheap to produce are fueling both with an opioid crisis.

In North America, the use of synthetic opioids such as fentanyl are responsible for two decades of increases in opioid overdose deaths. In 2018, fentanyls were the cause in two thirds of the 67,367 overdose deaths in the United States. Likewise in Canada, though with lower numbers. The overdose deaths attributed to fentanyls are partly driven by the unpredictability of their potency as found in illicit drug markets.

In West, Central and North Africa, the market for non-medical use of tramadol has grown considerably. An increasing number of people with tramadol use disorders are entering treatment in the region.

Stimulant drug use on the increase

Cocaine and methamphetamine dominate the stimulant scene. The use of both substances is rising in their main markets. Some 19 million people used cocaine in 2018, fueled by the drug’s popularity in North America and Western Europe. Roughly 27 million people used amphetamines that same year, expressively ATS in South-East Asia.

Opioid shortages caused by COVID-19 restrictions could lead to users substituting with more readily available substances. For example, alcohol or benzodiazepines, or to mixing with synthetic drugs. More harmful patterns of use may emerge as some users switch to injecting, or to more frequent injecting.

The financial downturn and social distancing rules could also have a double impact on people who inject drugs. They are more vulnerable to COVID-19 infection and complications from the disease because their compromised immune systems. And they are also likely to face problems in accessing treatment and other services from under pressure health providers.

In conclusion, as emphasized by the WDR 2020, addressing the drug use and trafficking problem requires the implementation of drug policy lineup with broader UN agenda for sustainable development. Particularly, on health, human rights, peace and security.