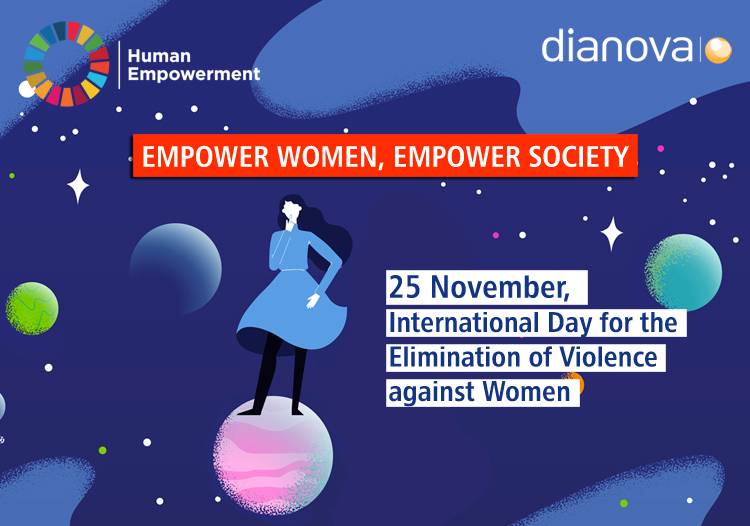 19 November 2019 – “Empower women, empower society” is the closing motto of the short video that spearheads the third phase of Dianova’s Human Empowerment campaign.

Started on the International Day against Drug Abuse and Illicit Trafficking (26 June 2019). This campaign revives on the occasion of the International Day for the Elimination of Violence against Women. Until Human Rights Day, on 10 December, the Dianova Network will especially showcase the relationship between violence against women and substance use.

Featured in the campaign flagship video is a teenage girl who. Because of negative experiences, gets lost in a spiral of addiction and violence. In Summary, the video aims to highlight the specific problems faced by girls and women with substance use disorders. As well as the importance of their empowerment as a tool for bringing violence and stigma to an end.

The violence experienced by women (especially sexual violence and/or intimate partner violence) in substance use and abuse settings is more a consequence of the patriarchal system that of substance abuse per se. For this reason, the specific dynamics between substance use and gender violence should be addressed in a holistic manner.

In many instances, substance use and abuse settings are environment in which relationships are characterized by reduced control mechanisms and altered reaction capacity. Consequently, that can encourage the manifestation of structural violence against women[1].

Women who are victims of partner violence may also consume (especially alcohol and anxiolytics) to anaesthetize or dissociate themselves. Used as a strategy for coping with this violence. After depression, in fact, addiction is most common disorder among victims of violence.

“The strong link between addiction and violence against women is also revealed beyond the intimate sphere. To find illicit psychotropic drugs, such as heroin, cocaine and others, women need to engage in environments where violence and sexual blackmail are pervasive “, adds Montse Rafel, Director General. Lastly, women who are victims of violence and have an addiction problem are less likely to seek and receive treatment due to their social isolation.

For these reasons, the Dianova Network supports all necessary measures to protect women with substance use disorders. Also and suffering violence, with the aim of improving the rates of admission to addiction treatment centres and police protection services and intensifying the treatment and follow-up of perpetrators. Finally, Dianova advocates the mainstreaming of a gender perspective in the design and implementation of drug and alcohol policies. Including gender-specific addiction treatment programmes and services.

Empowering girls and women enables them to acquire the means to make decisions that can determine their future.

Dianova International has Special Consultative Status to the Economic and Social Council of the United Nations (ECOSOC), it is a registered civil society organization to the Organization of American States (OAS) and an official partner of UNESCO. Dianova is also a member of the executive boards of: the Conference of NGOs in Consultative Relationships with the United Nations (CoNGO), the World Federation of Therapeutic Communities (WFTC), the NGO Committee on Mental Health, and the Vienna NGO Committee on Drugs (VNGOC).

A meta-analysis of 96 independent studies involving nearly 80,000 participants showed that the risk of aggression to an intimate partner triples in cases of abuse or dependence on alcohol or other drugs.