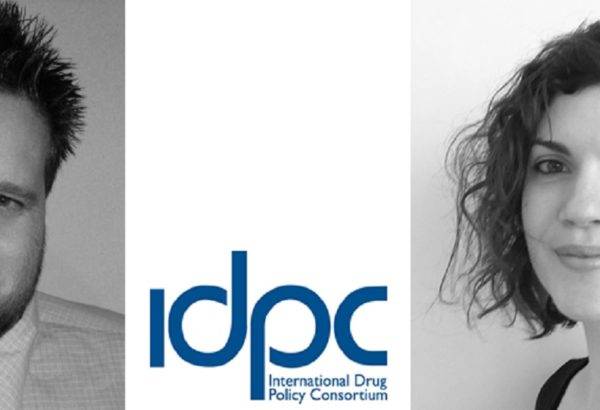 In March 2019, the international community gathered in Vienna for a high-level Ministerial Segment. The goal: to take stock of the past 10 years of global drug policy and chart the course for the coming decade in UN drug control. No only a key opportunity for civil society to influence the debates. But also call for more effective global drugs policies going forward.

Finally, building upon the momentum created in 2016 by the UN General Assembly Special Session (UNGASS) on drugs and its relatively progressive Outcome Document.

Acknowledging the failures of the past decade of drug policy

Ahead of the 2019 event, there was the absence of any meaningful official review of progress made in international drug policy since the adoption of the 2009 Political Declaration on drugs. Hence, IDPC – a global network of more than 180 NGOs working towards more humane drug policies – conducted its own analysis of the past decade.

Our analysis ‘Taking stock: A decade of drug policy’ utilised the available research from the UN, governments, academia and civil society. Specifically, to find out what the international community had achieved over the past ten years.

It underscored that cultivation, trafficking and consumption have all increased since 2009. As have the numbers of drug use-related deaths, in particular a recent surge in preventable overdose deaths. The report also highlights the catastrophic human rights toll of repressive drug policies. Including: severely overcrowded prisons, the continued use of the death penalty, extrajudicial killings, compulsory detention and corporal punishment.

Instead of promoting development and security, punitive approaches towards drugs have exacerbated violence, corruption, poverty, stigma and marginalisation. 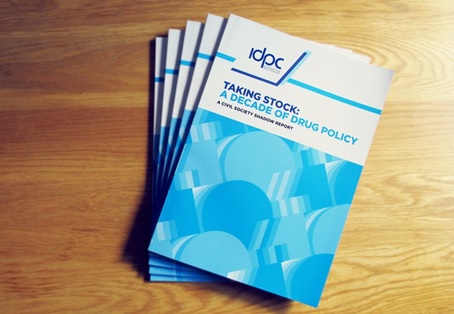 The UN itself – be it in Vienna, New York or Geneva – has recognised some of the devastating impacts of global drug control. And yet, the negative consequences of drug policies themselves had never been officially acknowledged before. Up until recently.

Indeed, one of the key ‘wins’ from the Ministerial Declaration, adopted by consensus at the opening session of the 2019 Ministerial Segment, was a lengthy paragraph. In particular, taking stock of the many ‘persistent and emerging challenges related to the world drug problem’.

Keeping up the façade of the Vienna Consensus

As the UNGASS Outcome Document in 2016, the Ministerial Declaration was negotiated at length over the past year. It resulted in a mixed bag – product of the fraught consensus that characterises Vienna over the past decades. as a result, it is becoming increasingly difficult for governments to reconcile fundamental differences on what drug policy should look like.

It is therefore unsurprising that, the final text acknowledges the spectacular failure of achieving a drug-free society over the past decade. In other words, the 2009 Political Declaration’s overarching goal. Nonetheless, it re-commits the international community to ‘work towards the elimination’ of cultivation, production, trafficking and use.

Positively, however, the Declaration also commits member states to ensure better access to controlled medicines. To reduce drug use-related harms. To address the development dimensions of drug policy. And to make better use of alternatives to conviction or punishment. 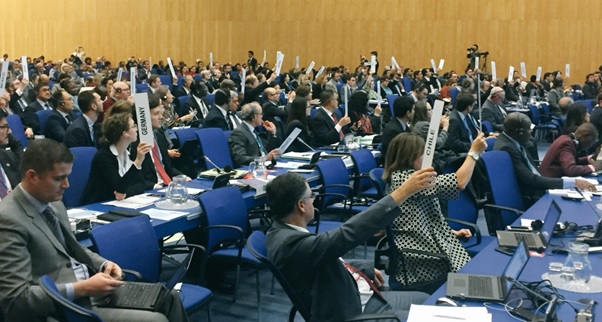 What, then, can we expect of the next decade in drug policy? On this aspect, the Ministerial Declaration remains vague. Member states were unable to agree on a clear way forward. But here are a few pointers below.

One of the main points of friction during the negotiations of the Ministerial Declaration was whether to focus on the 2009 Political Declaration. Especially, its controversial paragraph 36 calling for the eradication of the illicit drug market by 2019. Or on the other hand the 2016 UNGASS Outcome Document. By all means, the most recent and comprehensive policy document.

Incapable of agreeing on this issue, member states opted to reaffirm and ‘accelerate’ the implementation of both high-level documents. The research from the Government of Norway clearly showed the significant overlap between the two.

This compromise constitutes both a danger and an opportunity. A danger, because it implicitly reaffirms the 2009 eradication goals. Markedly, which could continue to justify repressive and harmful drug policies to achieve these unrealistic goals. For instance, in countries such as the Philippines, for example, ‘drug-free world’ rhetoric underpins the current policies being employed.

The flip side of this is the opportunity to focus on UNGASS implementation instead. In particular its commitments to protect human rights. Promote a gender perspective. Align drug policies with the Sustainable Development Goals (SDGs). Prioritise health for people who use drugs and those in need of pain relief and palliative care.

Several member states, including from the EU and Latin America, have already made it clear their top priority for the coming decade. To implement the UNGASS recommendations. At IDPC, we welcome this position. And will push hard to ensure that all future debates on global drug control are framed under the seven themes of the UNGASS Outcome Document.

Measuring progress in drug control over the next decade

One major step forward for UN drug policy will be the revision of the Annual Report Questionnaire (ARQ). To clarify, the main data collection tool used by the UNODC to track progress in drug policy. This process started over a year ago. However, the 2019 Ministerial Declaration commits the CND to adopt a ‘strengthened and streamlined’ ARQ which ‘reflects all commitments’.

The current ARQ mainly reflects the 2009 Political Declaration (having been revised shortly after the adoption of the Declaration). Hence, this review is a key opportunity to meaningfully incorporate the new commitments included in the UNGASS Outcome Document. As well as to align drug policy with the SDGs.

Here again, EU member states can play a key role by involving experts from the EMCDDA. Particularly, who have the knowledge, experience and expertise necessary to ensure the following. That issues associated with healthcare, socio-economic development, gender and age sensitivity and other key UNGASS themes are reflected in the new ARQ.

Civil society also has a major role to play. In fact, many of us have a thorough understanding of needs of affected groups on the ground. And have developed tools to further understand gaps and opportunities for improved data collection. See, for instance, the ‘Taking stock’ report, or the new ‘Drug policy metrics map’.

It continues to experience push back against their direct participation in this process from UNODC and various conservative member states. Therefore, it will be up to progressive states to include civil society experts in their own delegations. The aim is to create a data collection tool which can be more conclusively employed when we come to review progress again in 2024 and 2029.

Perhaps a more subtle but critical ‘win’ from the Ministerial Declaration was the commitment to ‘strengthen international and inter-agency cooperation’. And, on the other hand, to ‘enhance coherence within the United Nations system’ on drug control.

A few weeks before the Ministerial Declaration, the UN system Chief Executives Board for Coordination, chaired by the UN Secretary General, released its landmark ‘Common Position’ on drug policy. This is a major step forward to pave the way towards UN drug policies that are truly aligned with the broader UN. Especially, priorities of promoting health and human rights, development (including the SDGs) and peace and security.

This position was accompanied by a 10-year review of knowledge from the UN system coordination Task Team on drug control. Which was released at the Ministerial Segment itself.

The Ministerial Segment also benefited from strong and progressive statements from the Office of the High Commissioner on Human Rights, UNAIDS. As well as video messages from the UN Secretary General and the Director General of the World Health Organisation.

Special Procedures of the UN Human Rights Council also released key statements at the occasion of the Segment. In particular, condemning the human rights violations committed in the name of drug control against women and people of African descent. And those resulting from drug courts and arbitrary detention.

It will be up to UN agencies, governments and civil society to give these documents and tools the visibility they deserve, and to show leadership in implementing them on the ground.

Over the years, the civil society voice has become louder, more diverse and more established at the CND. And the Ministerial Segment was no exception. In a welcome move, the Civil Society Task Force was invited to speak at the opening of the Ministerial Segment. To emphasize, before high-level officials such as the UN Secretary General, the UNODC Executive Director, or Bolivian President Evo Morales.

Representatives of civil society were also carefully selected by the Task Force to speak during the two roundtables of the Ministerial Segment. Including from the panel. Civil society also distinguished themselves with the publication of key reports, the organisation of side events and live talk shows. As well as the close relationships built over the years with their respective governments.

As in previous years, several civil society representatives were included in official government delegations. And for the first time the EU funded the participation of two members of the Civil Society Forum on Drugs to attend the meeting. 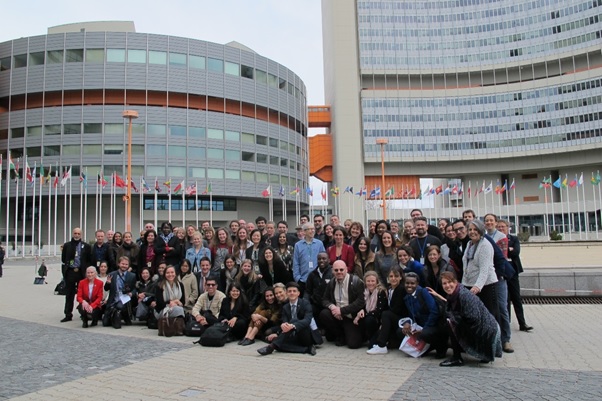 We continue to be subject to criticism, threats and intimidation from more conservative member states. For example, as was the case for our Brazilian colleagues when exposing the human rights abuses resulting from the militarisation of drug policies in their country. But also UN security, with the disproportionate response of VIC security to a Support. Don’t Punish family picture.

Finally, for the next decade, we count on the valuable support of UN agencies, EU member states and other progressive governments. Expressively, to promote and defend civil society participation on drug policy making processes. This is all the more important in the current political context. Especiallu, in which civil society space is becoming severely hampered by populist and authoritarian regimes across the world.

What next for civil society advocacy?

Much effort and energy has been spent on influencing the Ministerial Segment and its Declaration. But more remains to be done. Especially in the face of renewed drug war rhetoric, shrinking civil society space and lack of UN leadership on drug policies. In particular, that are truly focused on health, human rights and development for the next 10 years. This will necessitate:

Just a week ago, more than 330 NGOs called on the UN. In particular the UNODC, to increase its efforts in addressing the current health and human rights crisis faced by people who use drugs. In the coming months, the issue of cannabis scheduling will also be of critical importance. Considering, in fact, the unique pressure that this process is placing on the UN system.

> Enhanced advocacy towards UN agencies in Geneva and New York.

IDPC drafted a useful briefing paper on how to use the document for national-level advocacy. In the coming decade, civil society should act as a watchdog. Specifically, to ensure that these commitments are indeed translated by governments on the ground.

> Build on the synergies and solidarity within the civil society movement to work together and maximise our impact.

Both the UNGASS and the 2019 Ministerial Segment have been essential for civil society to come together. And, thus, promote more humane and effective drug policies.

The Support. Don’t Punish campaign, coordinated by IDPC since 2013, has also showed the readiness of advocates and affected groups worldwide. Notably, to make their voices heard as part of a global movement of solidarity. It will be up to all of us, in the next decade, to expand our flourishing movement for drug policy reform.

An article exclusive for Dianova Portugal by Jamie Bridge and Marie Nougier, IDPC, on the Global Drug Policies. Thank you!